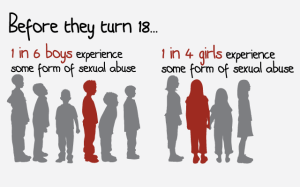 Sexual assault of children often includes incest as a subset of this form of sexual assault. While there is a substantial amount of overlap in the two types of assault, for the purposes of this website we have separated them in recognition of the different needs that victims of each type of assault may have.

Many adults tend to overlook, to minimize, to explain away, or to disbelieve allegations of abuse. This may be particularly true if the perpetrator is a family member.

NOTE: The absence of force or coercion does not diminish the abusive nature of the conduct, but, sadly, it may cause the child to feel responsible for what has occurred.

What should I do if I suspect my child is being sexually abused?

Parents are surrounded by messages about child sexual abuse. Talkshows and TV news warn parents about dangers on the Internet, at school and at home. However, parents don’t get much advice on how to talk to their children if they are concerned that sexual abuse is occurring.
Talk to your child directly.

Build a trusting relationship with your child.

Stop It Now: The Campaign to Prevent Child Sexual Abuse

Learn more about the laws in your state through RAINN’s state database.

The words and musings of a social worker

My Justice ~~ Patricia A McKnight

The trauma, The recovery, The truth

sacpros.org is devoted to breaking down the barriers which prevent access to mental health services by providing easy access to available services in the community

A Place to find peace, joy and care for yourself.

May you soar to your greatest potential, inspire others on the way and live abundantly in love

Youth Of A Nation:Bent not Broke

Not all wounds are visible

My Little Corner of the WWW

We are changing the world one woman at a time-#womenwithgifts

An abuse survivor's views on child abuse, its aftermath, and abuse-related issues