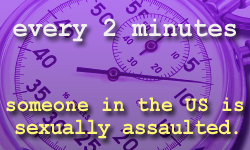 Every 107 seconds, another American is sexually assaulted.

Here’s the math. According to the U.S. Department of Justice’s National Crime Victimization Survey (NCVS)–there is an average of 293,066 victims (age 12 or older) of rape and sexual assault each year.

When do sexual assaults occur?

Sexual assault has fallen by 49% in recent years.—-3

Had the 1993 rate held steady, about 9.7 million Americans would have been assaulted in the last 20 years.

Thanks to the decline, the actual number of victims was about 4.2 million. In other words, if not for the progress we’ve made in the last 20 years, an additional 5.5 million Americans would have become victims of sexual violence.

While we should be happy that we’re making progress, we are still a very long way from solving this problem. Every two minutes, another American is sexually assaulted.

The words and musings of a social worker

My Justice ~~ Patricia A McKnight

The trauma, The recovery, The truth

sacpros.org is devoted to breaking down the barriers which prevent access to mental health services by providing easy access to available services in the community

A Place to find peace, joy and care for yourself.

May you soar to your greatest potential, inspire others on the way and live abundantly in love

Youth Of A Nation:Bent not Broke

Not all wounds are visible

My Little Corner of the WWW

We are changing the world one woman at a time-#womenwithgifts

An abuse survivor's views on child abuse, its aftermath, and abuse-related issues